Does she look too old, doesn't she? 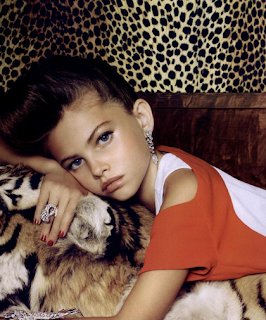 It's quite incredible the amount of young girls which looks like young women. They wanted to looks like women, they have cellphones, personal computer, some of them have an iPad, but also jewels, bags, tons of clothing and so on. I think it's crazy, but it's also a sign of today's trends.

What about us? We are parents, we are parent's friends and so we are part of this society. Do you really think it's possible to well educate a daughter in an island of “yes” surrounded by a sea of money?! I don't think so.

What I mean is well described by Thylane Lena-Rose Blondeau.

She is a young girl, she's 11 year old and in the picture she was 10, and she looks like a woman. As you can see she's just a little girl, but I believe she's much more like a baby-woman.

She's one of the most famous baby models, two important magazines were the fist steps into the notoriety: Cadeaux and Vogue. After the amazing picture of the on the Vogue's cover in France, hundreds of people started discuss about the ethic values of Thylane Lena-Rose's parents, publishing houses, photographer and so on. Today she's more famous than one year ago, it's 2012 and she's still the best-loved model from young people and fashion victims.

She looks like an angel, but she can be a wrong example for those girls which have never had the opportunity of being a model and will try to became a perfect-baby-woman. Parents often can not understand these feelings, but they must be the ones which take care of them children's balance between real and artificial worlds.

I believe it's important to create a bridge between different realities, so let your children play with plastic jewelery, educate them to be self-confident and then let them decide on their own about the outer face and them look! This doesn't mean they have to be no-fashion, but let them be happy to be at first beautiful inside and after to be pretty also outside!
Pubblicato da Laboratorio SEO a 23:57